Had a vacation week last week, took one day and went to Toledo for the day.  I had chatted with friends from Toledo and done some research so I had some idea of what I wanted to catch – It’s really like a fun scavenger hunt!  Caught some store logos on the way down, just can’t help myself:

Started with an iconic photo at the University of Toledo:

then headed for downtown. Unfortunately some of the angles I wanted to take ended up being in the shade. I know I’m supposed to go on a more cloudy day, I thought it was going to be partly cloudy on this day but it ended up being sunny, which posed many challenges.  I’ll be going back to catch those I couldn’t quite get.

Got to the Imagination Station (think science museum) when there were bunches of kids being unloaded off buses, so I waited for them to be done. I walked around and tried different angles, some focusing on the building, some more on the sign, ended up happy with these two after much trying around, takes longer than you’d think, so plan to be patient, it’s worth the wait. You can’t be in a rush, or you’ll just get frustrated and your photos will suffer for it… 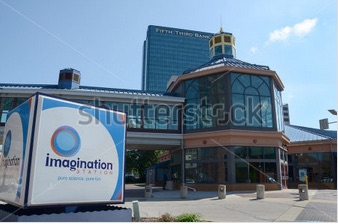 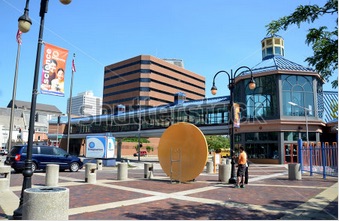 As I was driving around I noticed an Ohio Turnpike sign, and figured that was fairly iconic, maybe that would be worth a shot, and as we were in a bit of slow traffic I took a chance and got a sign photo that was accepted too:

Some of the photos I took in the morning were in the shade, so I went back again in the afternoon to try them again, but the sun was just too bright and didn’t make for good photos. Have to learn my lesson soon that shady really is best for some of these, but can’t help loving a sunny day when the angle is just right, luckily Toledo is just an hour away, so I’ll just keep the list with me for the next time I go past…

After taking a photo and cleaning it up, I added an editorial caption following Shutterstock’s preferred format, which you eventually get down to a science.  You can see all the Toledo photos Shutterstock accepted here.