Had a great day in Detroit Sunday, spent much of the afternoon taking photos. Here’s what I did:

To prepare I saw what photos already existed, looked through Things To Do in Detroit, and through FourSquare found this great list of Historic Areas of Detroit. I also looked up companies with headquarters in Detroit and noted their addresses.

Then, with a general sense of what I wanted to get, I set off, stopped at the Uniroyal tower on the highway and took some shots of the abandoned Detroit Central Depot, walking around trying different angles, etc. until I got one that worked: 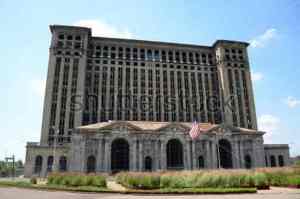 It was great to be flying solo today so I could take as much time as I wanted and try different angles.

Drove toward downtown, spotted some casinos, and headquarters of DTE Energy:

I then spotted Cass Tech high school and stopped there, where I met Burt, a homeless man who accepted my offer to take some photos of him in exchange for $5. We had a nice chat, I emailed him his photos – he mentioned he had not checked email in over a year…

Kept heading downtown and parked near Campus Martius park, found my bearings and decided on a walking path that would take me to Hart Plaza, the River Walk, Greektown, and back to Campus Martius. Lots of nice photos, though I wish there had been more people around to make it livelier…

I drove on to the Fox theater / Comerica park area, got some photos there. By then it was after 4 pm, but the game wasn’t until 8 pm, so not that many people around, had to wait a bit to get some folks in this photo:

Then over to Ford Field, and while I was there a fellow asked me to take his photo – I obliged, he gave me his email address and I sent him the photos, why not? 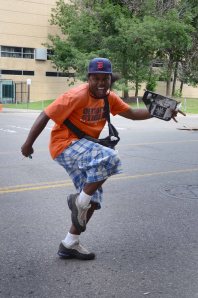 I was going past the Detroit Opera House when it was letting out a matinee performance, so got some shots there, then called it a day, I was tired from all the walking!

I took 216 shots altogether, resulting in 41 photos submitted to Shutterstock, and 39 acceptances! To see all the photos, visit  my Shutterstock site

– Good planning so I had some sense of what I wanted to catch, but left myself open to serendipity. A general check-list but no strict to-do list, since I live nearby and can drive in another day to catch remaining ones.

– Generally good camera settings. Again went with ISO 100 and shutter priority with 1/500 shutter speed, adapting as needed. I increased ISO in shady areas, changed exposure to make sure my histogram was squarely within the range and I wasn’t cutting off blacks or blowing out whites.

– Comfortable walking shoes, I was exhausted from all the walking…

– Was friendly and cordial, took photos of those who asked, chatted with people who asked questions, and if folks wanted me to send them photos I did. Some just asked to have their photos taken and then just walked on happy…

– Went early on a Sunday, so free parking was plentiful.

What I’ll do differently next time:

– For a different set of photos I’ll go at a busier time or to an event in Hart plaza, to catch it at a livelier time.

– Bring my water bottle with me. I filled it up and left it in the car…

Overall a wonderful day, just me and the camera and all the time in the world…